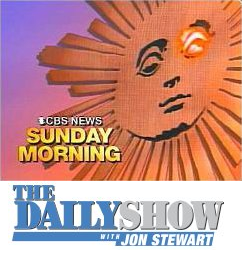 CBS News Sunday Morning has been around for as many years as I’ve been alive.  Originally hosted by Charles Kuralt, and since 1994 by the similarly venerable Charles Osgood, it is a show best described as Sunday New York Times Arts & Leisure section meets 60 Minutes.

While I was growing up, my mother loved this show.  She made a point of watching it every Sunday, as I’m sure she still does today (it’s been a while since we’ve talked about it).  Invariably, it would be recorded on VHS for rewind and playback, or later viewing, as there were no DVRs in those days.  Occasionally, she’d call my attention to some segment, pulling me away from whatever I was doing, or urging me until I watched the recording a little later.  I hated this show, and didn’t particularly have a taste for any kind of “news,” so this was no different.  I even vaguely recall Mr. Kuralt reading on-air, a viewer letter from the mother of a little girl “forced” to watch the show, referring to it as “the broccoli of the airwaves.”

Nonetheless, each and every time she called me over to watch some segment – usually art or science related – I did find it interesting and sometimes (gasp!) educational – even if I may have been hesitant in my childhood and adolescence to say so.  It should go without saying that I watch Sunday Morning as often as possible, and usually have it teed-up on the DVR in case I miss it or want to re-watch something.

I also watch The Daily Show with John Stewart on Comedy Central, and have watched it regularly ever since the show began with Craig Kilborn in 1996.  There is one segment that occurs in every show, in fact it is the only recurring segment that remains to this day from the time the show began.  That segment is “Your Moment of Zen.”  The “Your Moment of Zen” segment started as a random clip of some funny or comedic thing happening, with no commentary.  Over time this evolved into a clip of something related to a story or topic covered on the preceding show.  Usually this includes something comedic, and/or being taken out of context, still with no commentary.

The casual viewer of The Daily Show would probably never have connected this segment to anything in particular, just “one of those funny things The Daily Show does.”  The keen observer, though, who also watches Sunday Morning, would know that every broadcast of that show ends with a segment that was never named or titled for much of the series’ history.  This segment, now formally titled “Moment of Nature,” usually consists of a quiet, peaceful, or otherwise interesting nature scene – again, with no commentary.

Although I’ve never been able to formally connect these two segments, I’ve always felt like one existed as a clear parody of the other.  How interesting I found it then, when I recently came across something that ties it all together.  In 2006 on The Bob and Tom Show, a syndicated morning radio program, Paul Mercurio, who was a writer on The Daily Show appeared in an interview:

During the interview, Paul mentioned where the show came up with it’s well known “Your Moment of Zen” segment.  It seems the writers liked the quiet vignettes at the end of [CBS News] Sunday Morning. Thus “Your Moment of Zen” is an homage to that close – a moment of video, pulled from the wires, without commentary and for simple consumption.

So for anyone like me, who’s always wondered, there you have it!  Where would we be without such journalistic masterpieces as Sunday Morning, and mom to teach us to appreciate them.  More of you probably already watch The Daily Show than don’t, but I’d also venture a guess that more of you don’t watch Sunday Morning than do.  You don’t know what you’re missing.

3 thoughts on “Your Moment of Zen, on Sunday Morning”